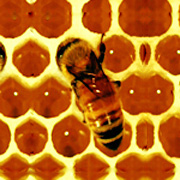 Honey starts out as nectar that bees collect from flowers. Nectar is a sugary fluid that includes the aromatic oils that give flowers their scent, as well as other trace substances. Basically, it is a reward that plants produce to attract pollinating insects and birds.

Bees collect this nectar by drawing it through their proboscis and storing it in their honey stomach. Honeybees then carry it back to their hive in tiny, 40-milligram loads. The foraging bees regurgitate the nectar and pass it to worker bees in the hive. These bees then gradually transform the nectar into honey by evaporating most of the water from it. Nectar contains about 80% water, along with complex sugars, while honey contains only 14-18% water.

Bees get rid of the extra water by swallowing and regurgitating the nectar over and over. This process retains lots of sugar and the plant’s aromatic oils while adding enzymes from the bees’ mouths. They also beat their wings furiously, fanning the nectar to evaporate its remaining water content. As the water evaporates, the sugars thicken into honey. Once the honey is finished, the hive bees cap the beeswax cells, sealing the honey into the honeycomb for later consumption.

A single worker bee produces only 1/12th of a teaspoon of honey in its lifetime. Working cooperatively, thousands of worker bees can produce over 200 pounds of honey for the colony within a year. The finished honey is thick, sticky and very sweet.