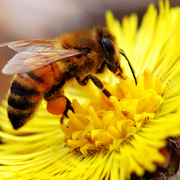 We carefully select our bees from queens with strong brood patterns. Our farm’s queen bees are local, Vermont raised, and therefore we minimize the risk of bringing in new strains of virus or disease. They are selected from the best bee hives based on their honey production, personality and brood patterns. Our goal is to breed strong bees from queens who are prolific layers.

How many types of bee in each colony ?

There are three types of bee in each colony, one queen, many workers, and only 0%-20% drones. The queen and workers are all female, with the ultimate difference being that the workers have underdeveloped ovaries. The drones are male.

The queen is developed from larvae selected by worker bees and specially fed in order to become sexually mature. There is normally only one adult, mated queen in a hive. A queen can live for a number of years as long as she is satisfactorily laying worker eggs. Worker bees live roughly 6 weeks in the summer and up to 3 months in the winter (since they are not working). Drones can live for months at a time, but since they are not vital workers, they will be booted out in the fall ending their lives of leisure.

Although the name might imply it, a queen does not directly control the hive. Her sole function is to serve as the reproducer. A well-mated and well-fed queen of quality stock can lay about 2,000 eggs per day during the spring build-up — more than her own bodyweight in eggs every day. She is continuously surrounded by worker bees who meet her every need, giving her food and disposing of her waste. The attendant workers also collect and then distribute queen mandibular pheromone, a pheromone that inhibits the workers from starting queen cells.

While worker bees do all jobs within and without the hive. Drones essentially do nothing but eat and attempt to mate. They can’t even help defend the hive since they lack the ability to sting. When the weather is nice enough, they fly out of the hive at around 1pm to what is called the drone congregation area and wait for a virgin queen to fly by. When she does, they will do their best to become one of the 13 to 18 drones to mate with that queen. Unfortunately for that drone, mating is fatal. But they have served their life’s purpose and their genetics carry on.

How many honey bees live in a colony ?